Is It Live Or Is It Virtual?

As Hollywood is starting to get back to work after the longest shut-down in its history, it is now faced with the question of how to entertain people safely. We all want to get back to work but now our families are involved. The good news is we get the chance to do what we do best, get creative.

Standing Room Only is an audience and casting company with a 35-year history of providing live audiences for television shows. March 13, 2020 was a dark day for the audience industry as every production began to shut down in the time frame of 3 hours. Not only was there an Armageddon style rainstorm in Los Angeles, there was an invisible virus that was insidiously spreading while innocently standing next to each other. At that moment, we would have to reinvent the way people gathered together, but no one could have ever imagined our new world.

It has taken more than six months for Hollywood unions to reach a deal with the studios to restart production safely and to bring audiences back to talk, game, comedy and competition shows in a safe and protected way.  “I have always said the audience is the 5th guest on a talk show and with the right audience, the live feedback is irreplaceable,” says Lisa Garr, owner of Standing Room Only. This has never been more evident than the first day Standing Room Only provided a live audience of a socially distanced 25 people for the Real Time with Bill Maher Show on September 11, 2020 at CBS Studios. The first thing Bill did was kneel on one knee and thank Jesus for an audience.  For long-standing comedians like Bill Maher, the real-time feedback is essential.

SRO is also providing a socially distanced live audience for Kevin Hart’s LOL comedy show taping in October 2020 and SRO successfully completed a 5-day taping for an MGM comedy show that taped outdoors at the Odyssey Restaurant in Burbank in July of 2020.

Following the “white paper” of health and safety guidelines established by the Industry-Wide Labor-Management Safety Committee Task Force is nothing short of a 20-step process. It is worth it knowing the health and safety of the audience, the crew, the performers and all of the families are involved and the risks need to be mitigated at every turn. It begins with an FDA approved Covid-19 test taken 24 hours prior to a work day with results within 24 hours. Every audience member is paid via payroll and covered under the payroll company’s workers compensation policy as well as full details on each audience member providing contact tracing and identification for everyone entering the studio.

All staff members of SRO, including Ms. Garr, are certified Covid consultants with the most up-to-date certifications. SRO can also provide the same Covid safety service to test your crew, talent and special guests. The mobile Covid-19 testing process only takes 10 minutes utilizing a simple QR code for registration. SRO manages the backend portal delivering all “cleared to work” reporting directly to production in compliance with all HIPAA privacy laws. This turn-key solution saves production companies days of navigating an already confusing process and streamlines the process so the set can remain safe for all involved.

Below is a partial list of the proprietary end-to-end system Standing Room Only has developed for Covid protocols. SRO partnered with Digipowers, a high-end software development company in San Francisco, to create a proprietary digital check-in/check-out system that allows contact tracing, touchless check in/out, and automated payroll.

The virtual audience trend does not have the same level of intimacy and connection needed in a far too virtual world. Standing Room Only has developed a hybrid audience of a small in-person crowd amidst a virtual audience of fans from all over the country, this is the best of both worlds. SRO can provide a proof of concept for the look and feel of a live and virtual audience that is both interactive, real-time reactive and safe.

Be the first to hear about our upcoming shows… it's FREE! 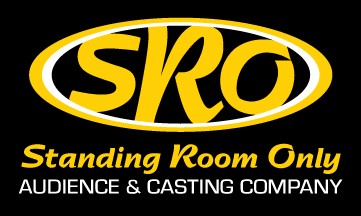